A weekend in Amsterdam

A couple of months ago me and my lovely girlfriend decided to go somewhere for the October bank holiday, and we had a few options in mind: London, Lisbon, Porto, Paris and Amsterdam.
London is one of those places that I shamelessly didn't visit, it's so close, just 45 minutes of flight that you always think "I can go whenever I want, but another time is better", you simply don't go because it's too close, and the day I'll move somewhere else and then it'll be too far I'll regret about it. Lisbon and Porto, and Portugal in general I think it's a great place to go, I still have find one single person that says it's an awful place, or even an okay one, all the people I know that went to those cities they always report that they are simply beautiful. But in October, on a bank holiday weekend, it was hard to find a decent flight without taking an extra day off, and as the both of us started a new job recently, we simply don't have that extra day, so we had to turn this option down, at least for the moment.
Paris is Paris, some people love it, some other hate it, I'm kinda on the fence but I have plenty of pressures from my lovely girl to go to visit it one day that I'll have to do it at some stage of my life, but again prices were too high, for both the flight and hotels, that we have to turn down this options as well.
Then we were left with Amsterdam. I have to say it: I don't smoke and I don't drink that much, and I'm not even that much interested in the type of trade you can get in the Red Lights District, so this city it might not be as much as attractive compared to some other people with different interests, but, it seemed to be a very interesting city to visit, the canals, the history, the art, and all those things you can do it without taking any substances that can alter your perception of the world, the cost of the flights were a bit cheaper than the other places we considered and the flight times were very convenient that we say "why not?".

Now, I as you probably already have clear, I started with some pre-concept about this city, and while some of them have been confirmed, and actually they were a bit underestimated, some others were completely wrong.
After our arrival in the city we had to confrontate with what was our "ideal of Amsterdam" and what was the "reality of Amsterdam", as far I could see in just a weekend.

In my mind Amsterdam was a city without a car, where bikes and trams were the only ways to travel into the city.
The reality wasn't half right, and half, terribly, wrong. The city is full of bikes, possibly more than what I saw in Copenhagen, but while in the Danish capital they have specific lanes and most of the times bikers strictly stay on them, in Amsterdam is the complete anarchy. You can expect bikes coming from any directions, from any lanes, at some stage I was so terrified that I thought they could jump out of the canal to try to kill me, and more than once I saw the fear of some other tourists while some locals tried to dodge them in a very scary and dangerous way. You probably get used to it if you live there long enough, but for those 3 days I wasn't prepare for that.
Also the trams pass very, very, very close to pedestrians, especially in the city center, and I wonder what the death-by-tram ratio is in that city. Plus you have to add the cars, that yes, despite the fame of being a bike-friendly city, it's full of cars, which add an extra layer of danger to the streets of Amsterdam. To be honest, it was so messy, that I would hardly think to live in that city, at least in the city center. 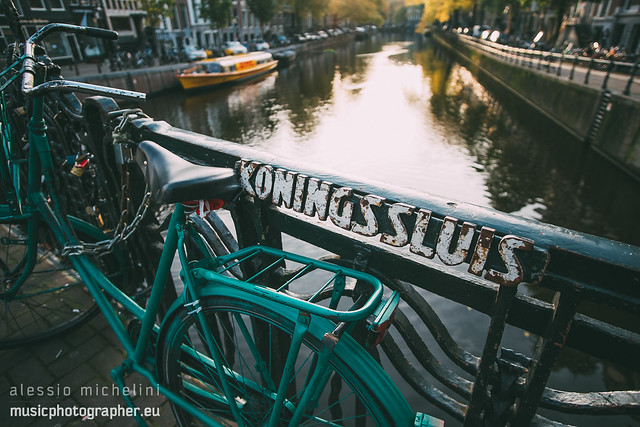