I said it in the past, and I'll say it again: you never fail with metal bands. Even if I knew just a couple of songs, when I saw there were going to play in the Academy, I just put my name down to request the pass, as I knew it was going to be a cracking gig to photograph. And guess what, I was right.
The Academy recently went under a new management, which decided to spend some money to renew that venue, which with the previous promoter was let down a bit, mostly because they had bigger venues and I guess they didn't care much of that place. Now the Academy it can be a really good venue to see and photograph gigs, and this gig showed all the potentials in my opionion.
I don't think the band itself brought any lights, and I think they just used the venue lights, but there were brilliant. And the band itself was a brilliant band to photograph, really dynamic on stage, and it was a pleasure to shoot this show, really good live band and I totally recommend to go to see them.
Anyway, as usual you can find some of the best photos down here, while on my flickr account you can find a beefy photo set of 59 (!!!) photos. 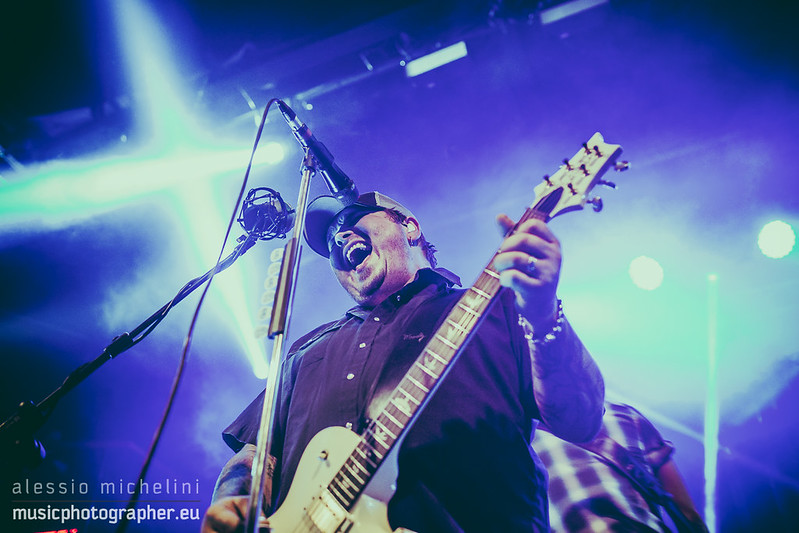 If this name, Black Star Riders, doesn’t ring you a bell, you just have to know that essentially they are the latest incarnation of Thin Lizzy, and they use this name simply because they didn’t want to write any new songs under the Thin Lizzy name, which is understandable, as Thin Lizzy is an heavy legacy to have, and you just can’t get rid of it easily. Fans will always expect Thin Lizzy’s songs from you, always. And it’s not an easy job for Ricky Warwick to replace Phil Lynott, I presume you will always be compared to the one of the most loved musician in Ireland (and no Bono, you are not in that list), of one of the most important, if not THE most important band came out from Ireland.
But despite the legacy they have to carry around, despite that you will always have to make the fans happy playing some of the old songs, they are still a great band to see live, and even the new stuff is pretty damn good to be honest.
But I’m not here to talk about music, but I’m a photographer, who shoot music. And I have to say that this gig was a really good one to photograph. I’ll never stop saying, the Olympia Theatre is one of the best venues to photograph a gig, great atmosphere and mostly, great lights! And from a band that was originated when the rock was Rock, they are not shy to lights, even if they were the supporter band, which generally gets only the basic venue lights, it was a really good show to photograph, very dynamic band on stage, not statues like Jake Bugg (sorry Jake, but you didn’t move by a notch when I saw you). Plus no bullshits like photo releases to signs, which it’s always great, just pure Rock.
Down here you can see some of the best shots I took that night, while here on flickr you can find the full set. 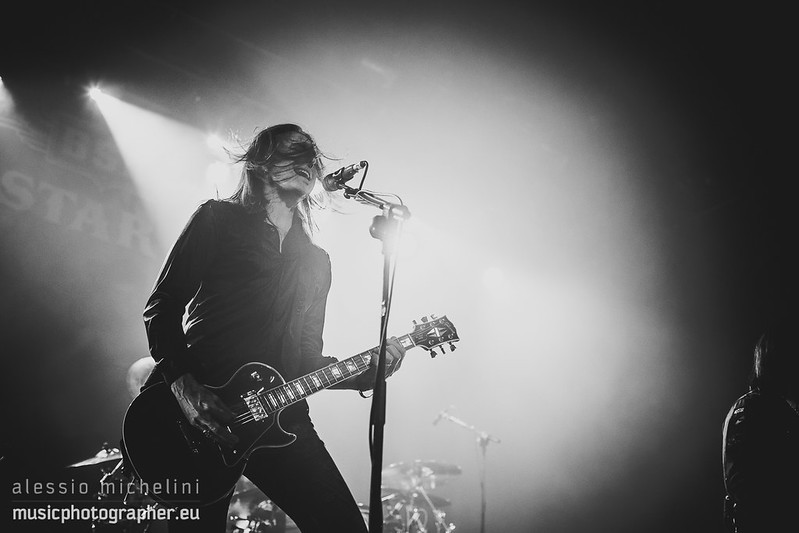 I fell in love with this artist with her first album, and when I saw the chance to photograph her in a decent venue, as the previous times she played in very small and very dark venues, I could not simply let this chance go and I asked for a pass.
I think she is pure class, not one of those singers that are good only to scream like a seagull, but she has a fecking dammint good voice and she sure knows how to use it, and her live performance, or at least for the time I could stay there, was simply flawless.
From a photographer point of view it was interesting, a lot of lights, some LED strobes on the sides, plenty of lights from the back and the sides, and a spotlight from the front it made the show a very decent one to shoot, not a very easy one as lights were changing quickly, maybe I would say challenging, but in a good way.
No photo release to sign and no restrictions whatsoever apart the standard “3 songs no flash”.
So in conclusion, a very good show to attend and to photograph, definitely an artist that is worth to photograph.
Down here you can find some of the best shots, while on my flickr account you can find the full set. 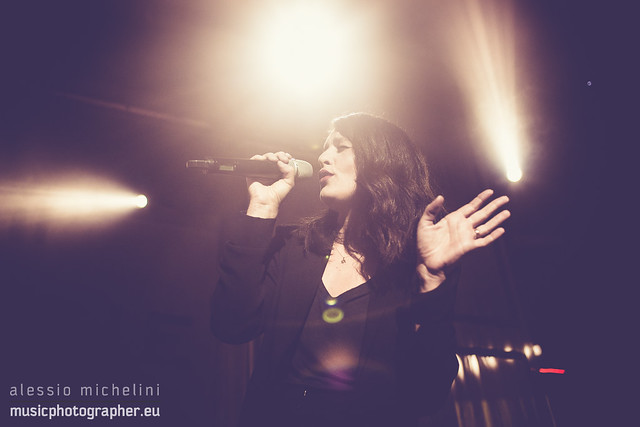 Written by Alessio Michelini
I don't listen to Metal music as I used to do when I was younger (much younger), over the years I started to prefer other different genres, but occasionally I still listen to a few metal bands (especially the album No More Tears by Ozzy Osbourne, after all these years I still think is one of the best metal albums written in history, if not the best), and one of them is Mastodon. Also as a music photographer I know that metal gigs they rarely let you down in terms of performance of the show, especially lights. You probably get the best out of Glam-rock/metal bands, or guitar heroes, people with a huge ego essentially, where it's as bright, or brighter, than pop acts.
So when I saw they were coming to play in Dublin I didn't think twice before asking for a photo pass, as you can easily imagine.
And more or less they didn't really disappointed me, they really are a great live band and I guess you could hardly find a disappointed fan in the extremely packed venue. 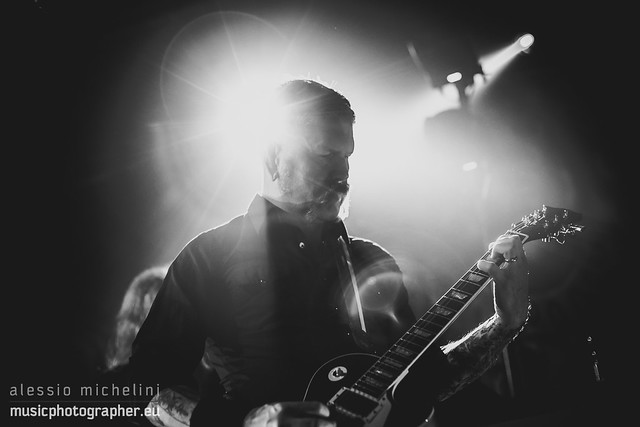 The Subways @ The Academy 2

The Subways are one of those bands that  you must photograph, they are so damn good live that you can't really miss them. Unfortunately they are not as popular as they were a few years ago, and honestly I did overlook regarding this simple fact.
Why? Well, this means they don't sell out venues as before, and when it comes to a specific venue, in this case the Academy, and quoting Admiral Ackbar in Star Wars, it might be a trap!

Because when a gig doesn't sell as it supposed to do, some venues prefer to simply cancel it, someone goes ahead anyway, but the Academy simply downgrade the gig to the Academy 2, the basement of the Academy, and while the main venue is a good place to photograph, the smaller basement it's simply one of the worst places for a music photographer.
And while, with the new management, they did improve the situation down there, adding a few new lights, and by making it looks prettier, they also added barriers in front of the very stage, and there's literally zero space for photographers. The only thing you can do is to stick to the sides of the barriers, right in front of the speakers, and pray your God (if you believe it).
The lights are slightly better, or at least is not as dark as it used to be, but now you have these LED lights at 1 meters from the artist that are not exactly the best lights you can ask, or at least if you are a photographer.
To be honest I wasn't happy for the band, it's not fair to them, they are such great performers and they totally deserved a bigger audience.
Anyway, I took some barely decent photos that night, and even if I wasn't sure for a while to publish them or not, I decided that it's not fair to show you only the photos when everything goes right, it would be too easy from my side. So, here we are, they are also on my flickr account, but as you could easily understand, I didn't took a million as my usual. 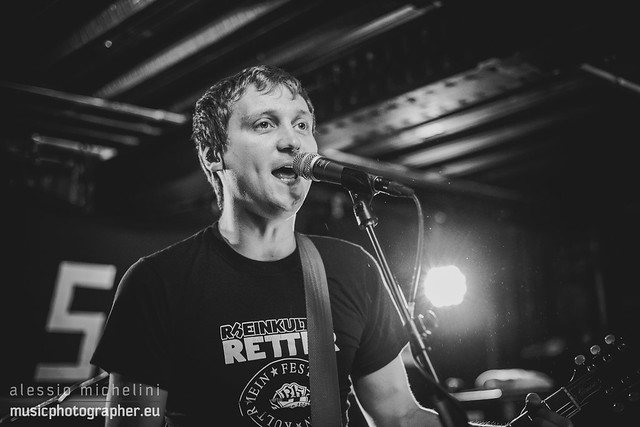