I've been working on this personal photography project from a while now, about 5 months now, and in this time I always brought my trusty mirrorless camera with me, and I've photographed to the people who, like me, commute everyday to work/college/pub/anythingelse and back with the train/luas/buses in Dublin.
At the moment I'm writing I've already took almost 200 pictures, which can be viewed on this set on my flickr account, which show a silent population made of people who mostly travel back and forth to the same place, every workday, people that spend most of their trip tapping on a phone, socializing with their "friends" on Facebook or Twitter, while they isolate themselves from the people around them. It's a slice of modern life at the end, even if it's a bit sad on my opinion.
As I said, I shot this project entirely with the Fuji X-E1, a camera that it's perfect for this job as people don't get scared by the size of it as it would happen if I go around with a big DSLR with big lenses, and actually they think is an old film camera, and this with the fact that I always look like a tourist, it helps me a lot. Also a good 95% where all made with couple of vintage manual lenses, while the rest have been done with the new Samyang 12mm f/2 NCS CS I bought a couple of months ago. While manual focusing on a train full of people it's not exactly the easiest thing in the world, once I got the grip on it, it becomes natural, and as I said before, it slows you down, and it gives you more time to think and to compose the shot. It forces you to do what a photographer should do before taking any shot, to observe the world around you.

Anyway, down here you can find some of the best shot I've done for this project so far, I hope you like them and as usual if you have any comments/critiques/whatever, please leave a message in the disqus box at the end of the page!
Thanks 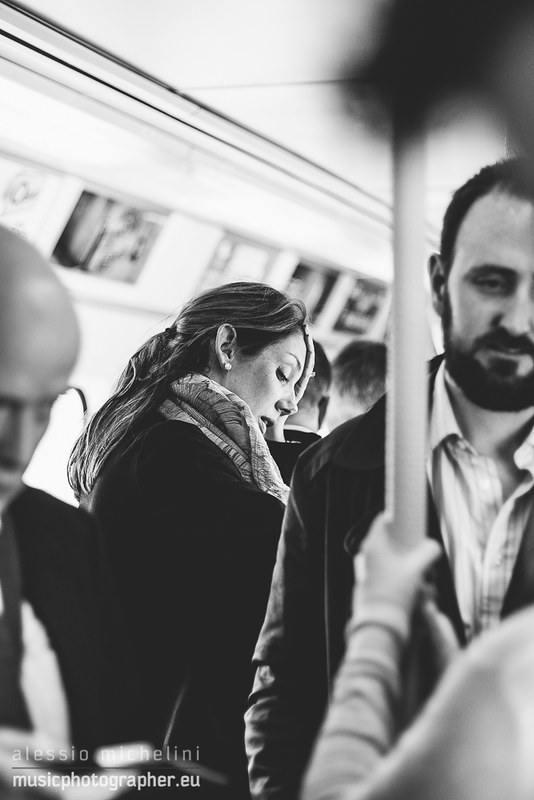